Save Our Family
One Blessed Little Family vs Breckinridge KY

“I am a free range human. Not meant to be caged. But I will stand up for my rights. Overwhelmed by the love and support.”

Nicole has been released from jail. But the State is still in custody of her 10 children. The Naugler’s fight is only just beginning. 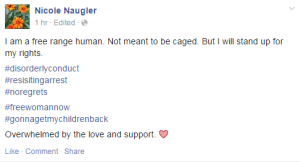